The Three Logics of Climate Politics 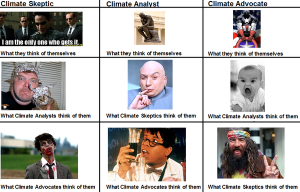 There are three competing logics of climate politics. One is the climate skeptic, convinced either that climate science is exaggerated or that the costs of action outweigh the benefits. Another is the climate policy analyst who accepts the climate science and evaluates policies designed to meet climate targets based on their cost-effectiveness.  The third is the climate advocate, who is convinced there is a climate crisis and focuses on which political strategies are best suited to decarbonizing the energy system. While having little patience for climate skeptics, the analyst also bridles at the open advocacy of climate advocates, scoffing at their exaggerated rhetoric and bemoaning the inefficiency of their prescriptions. In doing so, however, they frequently misunderstand  the logic of politics guiding the advocates.

I have a hard time understanding the logic of climate skepticism from serious people. I get that some are contrarian by nature and revel in railing against orthodoxy of any sort. I get that there are widely divergent views of the appropriate relation between the government and markets, and that serious climate policy might seem alarming to those with a libertarian bent. But I have a very hard time understanding how any conservative who understands welfare economics can deny that there are certain well understood conditions, particularly externalities and public goods, which justify a strong government role in climate policy. I find it particularly hard to understand what appears to be a willful inability to accept the logic of probabilities implied by the best climate science. Even though it is frighteningly cynical, I find it easier to understand Doonesbury’s character depicted as “the honest man,” who accepts the science but opposes sound climate policy “because I care much more about my short-term economic interests than the future of the planet! Hello?”

But this post is not about the logic of climate skepticism, which is too mysterious. I want to focus on the difference in the logics of climate advocates and climate policy analysts. The conflict in perspectives between these two views was reinforced in my mind again Saturday by a New York Times column by Joe Nocera about the KeystoneXL pipeline. The column accuses climate advocates of exaggerating the significance of KeystoneXL’s contribution to global warming.  “The crude oil from the tar sands of Alberta, which the pipeline would transport to American refineries on the Gulf Coast, simply will not bring about global warming apocalypse.” Therefore, Nocera’s logic seems to go, given that we need the oil and Canada is a reliable partner, the pipeline should be approved.

Several leading climate policy analyst/bloggers/tweeters chimed in “yup, that’s what we’ve been saying for months.” Andrew Revkin, the dean of climate blogging at the New York Times, tweeted a reference to his September 2011 overview piece that generally supports Nocera’s conclusion. Revkin’s piece refers to the affirming work of two other leading climate policy analysts, Andrew Leach at the University of Alberta and Michael Levi at the Council of Foreign Relations. The analysts’ essential argument is two-fold. First, given the amount of GHG emissions enabled by the pipeline and the nature of North American and especially global oil markets, the marginal impact of the KeystoneXL pipeline on global GHGs will be insignificant. Second, there are much more cost-effective ways to reduce GHG emissions than blocking pipelines.

I believe that both are these arguments are unquestionably correct. But I also believe that they completely miss the point about why environmentalists are so opposed to the KeystoneXL. The logics of  analysis and advocacy are fundamentally different. The analyst is guided by aspirations for truth and well-reasoned argument, and guided largely by the value of maximizing the cost-effectiveness of solutions. They chaff against exaggerations and misuse of data by advocates on all sides, and search for the best reasoned argument for the most efficient path forward.

In contrast, the climate advocate is trying to maximize political leverage in an effort to foster systemic transformation of the energy system. The logic of political action and movement building is different from the logic of policy efficiency. The advocate works to strategically frame problems and solutions that work politically, not those that best adhere to the standards of analytical rigor. Frequently, this involves exaggerated claims that aggravate the analyst.

Probably the best example from the KeystoneXL is the James Hansen claim that the pipeline represents a “carbon bomb” because it increases access to Canada’s unconventional oil deposits in the tar sands. [Correction: the phrase attributed to Hansen and reported repeatedly by McKibben and others is "fuse to the biggest carbon bomb on the planet."] If fully exploited, Hansen claimed, the tar sands could add 200 ppm of GHGs to the atmosphere, meaning it’s “essentially game over” in the battle against climate change. This” game over” frame was repeated again and again by Bill McKibben, the lead organizer of the anti-Keystone. Analysts chastised him for exaggeration and confusing the magnitudes at stake. Turns out Hansen and McKibben have a pretty good understanding of the magnitudes of carbon flows. It’s just they find the metaphor of “carbon bomb” and “game over” enormously powerful as a catalyst for mobilizing people, so they continue to use it.

McKibben and his allies didn’t choose to draw a line in the sand on KeystoneXL because it was the most cost-effective policy to reduce GHG emissions. They picked it because it made political sense given the state of the climate movement in US and global politics. Having failed so spectacularly at Copenhagen and then in the US Congress to get meaningful action, McKibben and Co. recognized that to have meaningful success, more direct action would be required to galvanize the intensity of preferences at the grassroots level needed to foster a powerful social movement. Keystone XL turned out to be a perfect short-term vehicle for that.  It was a point of leverage they could use to focus concentrated pressure, and it turned out to be a spectacular success on its own terms.

The Leap of Faith

I’ve felt the conflict between these two logics very personally. As an academic, I’ve always prided myself on the commitment to analytical reason and been uncomfortable with the rhetoric of advocates even when I’ve shared their values. But in recent years I’ve felt increasingly unsettled in that stance as the gravity of the climate crisis has become more apparent. The past two decades of climate politics have clearly demonstrated that “speaking truth to power” has not been effective at inspiring climate action. And as I’ve tried to come to a deeper understanding about humanity’s failure to act yet on climate change, I came to an insight that transformed my stance.

When you consider the structure of the climate challenge as a public goods and public choice dilemma, you can see that if we are guided by short term material thinking we will simply be incapable of rising to the challenge of taking the concerted action sufficient to avoid dangerous climate change. The logic of the climate policy analyst is dominated by this economic rationality that can’t generate the necessary solutions. To envision a capacity to act you need to take a leap of faith that enough citizens and leaders are willing to act on moral, not economic grounds. You take climate action not because it is in your or your nation’s interests, but because it is the right thing to do. And you need to start acting that way yourself.

From Analyst to Advocate

UBC was fortunate to have Bill McKibben come visit and give a series of talks in November. I had breakfast with him in a small group and challenged him on all of these factual issues. What was immediately apparent is that he understood all of the criticisms, but was simply working from a different logic about how to maximize political opportunities. In a larger group he had a session about the tensions between academics and advocates. He bemoaned analysts who were “in love with the caveat” and unwilling to join hands with advocates in the fight for climate action. He explained that he was sensitive to the concerns of many academics that they would be sacrificing their credibility if they engaged in advocacy. He then spoke of the gravity of the climate crisis, calling it the “greatest challenge of our time,” and asked: “What are you saving your credibility for?”

McKibben closed his November speech at UBC with the following words:

“There’s no guarantee we’ll win the fight against climate change. There are scientists who think we’ve waited too long to get started in this fight, and there is too much momentum behind this heating. There are political scientists who think the odds are simply too high; there’s too much money piled on the other side. If you were a betting person you might be wise to bet with them because we’ve been losing more or less for twenty years. But that is not a bet you are allowed to make. The only stance for a moral human being when the worst thing on earth is happening is to get up in the morning and figure out how you can change those odds.”

What I’m doing is working with students at UBC to create a campus climate movement, UBCC350, oriented towards fostering meaningful government action against carbon exports from British Columbia. By taking on a more explicit advocacy role, I’m not abandoning the commitment to analytic rigor typified by the logic of the analyst. I see myself as harnessing that in the service of advocacy.

Up next: more on the model will are building for using university campuses as strategic nodes in the climate movement.

25 Responses to The Three Logics of Climate Politics