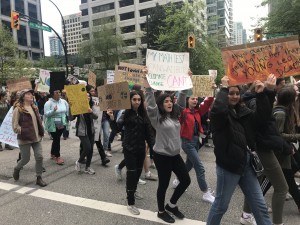 Faculty at universities and colleges across Canada have been working to support the Global Climate Strike events that in Canada will be focused around Friday, September 27.

Some faculty have pledged to donate their pay for the day to groups working to address the climate emergency. You can take the pledge here. I’ve been asked what groups I recommend. Here’s a list of groups that I would suggest.

For those outside of Canadian university faculty that would like to support the global climate strike by donating their day’s pay, please join us! This list is has two global groups and a number of Canadian-focused groups. Folks in other jurisdictions might want to pick other groups.

350.org, leading global group “working to end the age of fossil fuels and build a world of community-led renewable energy for all.”

Climate Strike Canada, “the overarching network of students, young people, activists, and allies, which connects all of the climate action surrounding the Canadian school strike movement.”

Our Time, “a national campaign led by young people and millennials who are championing a vision for a Green New Deal for Canada — an ambitious plan to tackle climate change and inequality together.”

For Our Kids, “a network of concerned Canadian parents and grandparents taking action on climate” (half of their donations go to Climate Strike Canada).

International Rescue Committee, a refugee aid group that “helps people whose lives and livelihoods are shattered by conflict and disaster to survive, recover, and gain control of their future.”