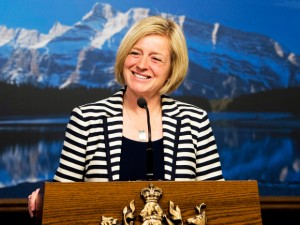 Rachel Notley’s Government of Alberta made history today by transforming her province from a renegade to a leader on climate policy. The province announced today that it will introduce a $30 per tonne economy wide carbon pricing (starting at $20 per tonne in 2017 and increasing to $30 in 2018). It will also cap carbon emissions from oil sands facilities at 100 million tonnes, compared to about 70 million today. That is designed to allow for growth from the facilities currently under construction. The province will also phase out coal use for electricity by 2030, and require 30% of its electricity to be generated by renewables by 2030.

These changes are monumental. While the details of the carbon price will need to be analyzed, its $30 level matches BC’s current carbon price, the highest in Canada. The cap and trade regime being operated by Quebec and California currently has a price of about $16 per tonne (although that price is likely to increase somewhat by 2018).

The overall emissions cap is also important, signalling a limit on the growth the oil sands impact on our climate. It does not cap oil sands production, but increased production beyond the level of those facilities under construction will only be able to occur if innovation drives down carbon intensity of oil sands significantly.

These changes fundamentally alter the politics of Canada. It will make it much easier for Canada to become a constructive player in global climate policy. The meeting tomorrow between Trudeau and the premiers can be much more productive with this bold move by Alberta in advance. If other provinces want to claim the mantle of climate leadership, they are going to have to step up their game, creating the potential for a “race to the top” in Canadian environmental policy. It will contribute, as Notley stated, to “a significant de-escalation worldwide of Alberta’s oil sands.”

These changes are testimony to two fundamental political changes. The first is a concerted resistance movement to new oil sands transportation infrastructure in both Canada and the United States.  While there are many sources of this resistance, to many anti-pipeline activists, resistance has always been first and foremost about forcing climate policy change. Notley referred to this indirectly when she described Obama’s denial of the Keystone XL pipeline application as a “kick in the teeth”. The second dramatic political shift is Notley herself, beaming from the podium. Her May 2015 election brought decades of Conservative rule to an end, allowing this tectonic shift, a reminder that elections matter more than anything else.

There’s a lot more work to be done. Remember that we need to completely decarbonize the energy system by mid-century. But today is a day for celebration. Alberta has bent its carbon emissions curve, and provided a lever to Canada to show real climate leadership.