The Political Dilemma of Climate Action: a Four-Part Overview 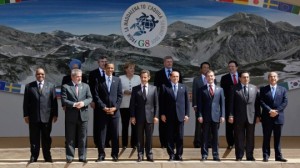 Addressing the monumental challenge of climate change requires the best available science, but it also demands concerted, coordinated, and courageous political action by policy makers at all levels of government. This post outlines the political challenge of climate action, and sets an agenda for future posts. We would of course welcome your input on any of these ideas.

1. There is a climate emergency that justifies urgent action for deep cuts in carbon emissions. In the wake of the publication of the 2007 report of the Intergovernmental Panel on Climate Change, thinking among scientists and concerned political leaders seemed to coalesce around the view that avoiding “dangerous anthropogenic interference” in the atmosphere required keeping global temperatures from increasing more than 2 degrees C above pre-industrial levels. That temperature objective would require reductions in greenhouse gases by about 80% by 2050. More recently, a number of prominent climate scientists have argued that this emission and temperature target are likely to be insufficient to avoid dangerous climate impacts.

In a future post, we’ll outline the evolution of scientific thinking about what levels of greenhouse gases in the atmosphere may pose dangers to humanity.

2. Climate action poses a harsh political dilemma for policy makers. Despite this emerging consensus on the urgency of climate action, policy makers are not responding with apparent urgency. While targets of two degrees and/or 80% emission reductions have found their way into EU policy, declarations of the G8 and Major Economies Forum, and the climate bill passed by the US House of Representatives, few concrete actions have been adopted thus far that promise to drive emissions down as sharply and as quickly as needed.

The nature of the climate problem creates massive challenges for politicians who need continued support from voters. Costs and benefits are separated in both place and time, and uncertainty is pervasive. Climate stability is a collective good shared globally, but mitigation costs are borne locally by energy users and others currently benefiting from greenhouse gas generating activities. Both the energy system and the climate system have immense inertia, so rapid decarbonization is a formidable technical and economic challenge, and the payback in terms of response from atmospheric greenhouse gas concentrations is both surprisingly slow and highly uncertain.

As a result of these problem characteristics, the political dilemma of climate action in a nutshell is that the costs of action are here, now, and relatively certain, but the benefits of action are global, distant in time, and highly uncertain. To internalize the externalities created by greenhouse gas emitting activities, politicians have to raise energy prices, imposing costs on voters and powerful interest groups.  Yet politicians have been reluctant to do so, because the benefits are globally diffused, long term, and highly uncertain.

Without a massive shift in public attitudes that either tolerates or demands these increased costs, the dramatic policy action required by the climate emergency is unlikely. But promoting that attitude shift is extremely difficult. The general public has not responded thus far to the cavalcade of scientific studies sounding alarm. It is more likely to respond to experience. But for the most part, the alarming consequences of climate change are science-based projections, not currently experienced by the public. By the time the effects are sufficiently apparent to prompt public demands for political action, it will almost certainly be too late. The characteristics of the climate problem undermine citizen mobilization and paralyze policy makers.

In a future post, we will explore the potential for social movements, especially a youth movement, to overcome the climate apathy of the general public.

3. Climate fatalism can be effectively countered. One potentially debilitating threat to political mobilization is the idea that the climate challenge is just too formidable – that no matter what we do, “we are doomed,” and thus costly, aggressive action on greenhouse gases is futile. One way to counter this belief is to raise awareness about existing studies on the technical feasibility and costs of mitigating climate change. Most of the analyses of the costs of deep cuts in emissions, including the Stern Report, the 2007 IPCC report, and Jaccard’s Sustainable Fossil Fuels show that deep cuts are technically feasible and won’t bankrupt the economy. The Stern Report estimates that achieving 80% reductions will cost about 1% of GDP. Jaccard argues that carbon emissions can be eliminated from the energy system by increasing the percent of the average household budget from 6% to 10% (p. 316). Careful projections of the costs of transforming the energy system suggest that addressing the climate challenge is both feasible and affordable – hardly the end of civilization as we know it suggested by “peak oil” advocates.

In a future post, we will provide an overview of the current evidence on the economic impacts of deep cuts in greenhouse gases.

4. The distributional impacts of higher energy prices need to be addressed. Another threat to the legitimacy of aggressive action on climate change is the distributional impact of the resulting increase in energy and related prices. Distributional issues across nations, especially between developed and developing nations, are probably the single greatest obstacle to an effective global agreement to address climate change. Even within developed countries, distributional issues between people with different income levels are also a significant political issue. While the overall economic impact of deep cuts may be modest, energy price increases will be felt disproportionately by lower income groups for whom energy costs are a higher fraction of household budgets. Finally, addressing the economic impact on particular sectors that are affected by the transition away from greenhouse-gas intensive activities will also be a political challenge. If these distributional issues cannot be addressed, the legitimacy of climate action policies will be undermined.

A future post will provide an overview of mechanisms available to address the distributional consequences of raising energy prices to address climate change.

We welcome your feedback idea on this overall conceptualization, or any of the parts we propose to address.