The Disappearing Issue: Forestry Content in British Columbia Speeches from the Throne, 2000-11

Issues come and go, but the collapse of forestry on the agenda of the government of British Columbia is extraordinary. Yesterday’s Throne Speech did not contain the words forest, forests, or forestry.

I got curious and had some students go back and look at previous thrown speeches over the past decade to see if there was any precedent for this. The results from 2000 to present are on the chart below (click to enlarge). There was in fact one other Throne Speech during this period that did not mention forests – Gordon Campbell’s first in 2001. The mean for the 17 speeches over this period is 10 references, with a peak of 28 in 2003 and another in 2009. 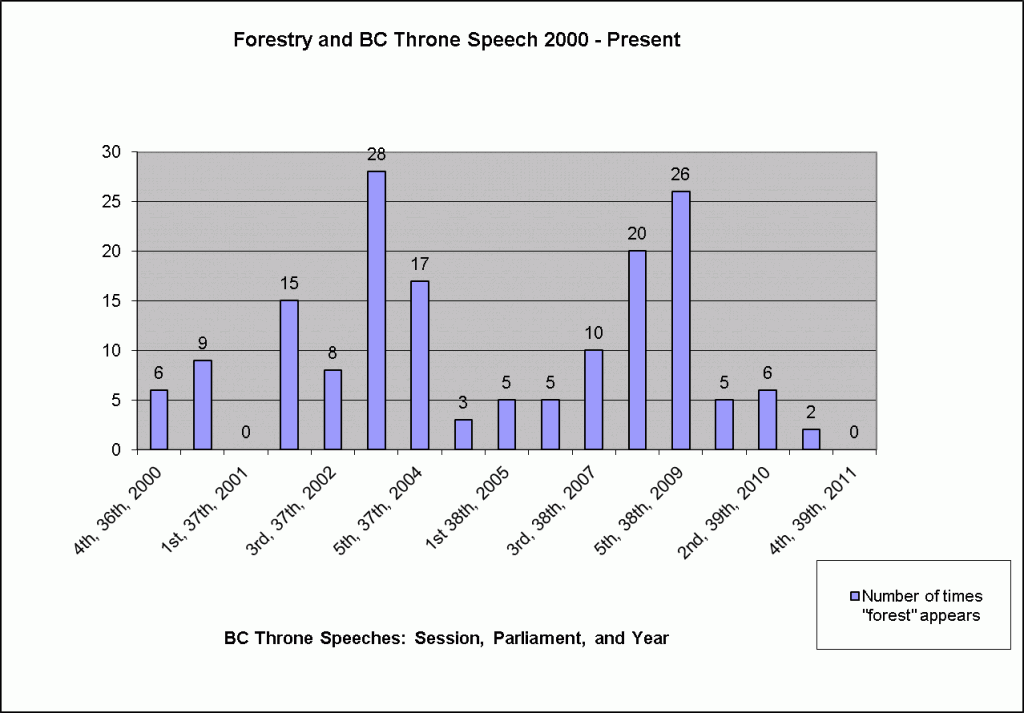 I have no rigorous explanation for the trends, but the two peaks and then steady declines afterwards are quite striking. The first peak was Gordon Campbell’s “year of the forest” in 2003, when a big burst of forest legislation was brought forth, centered about the Forest Revitalization Act. That was a period of real policy action. The second peak was 2009, when the government wanted to appear responsive to the Great Recession and the crippling impact it has on the forest industry. It released a Forestry Roundtable report and there were a variety of initiatives coming Premier Campbell’s energy and climate initiatives with forestry. But little policy change emerged during that period, and as the government ran out of tools to attempt to reverse the decline in forest jobs, it seems to have dropped the subject all together.

The complete absence of forestry from the Throne Speech is indeed striking. Two-thirds of the province is covered with forests, and the condition of the forest is vital to many environmental services enjoyed by British Columbians. Despite the recent decline, product products are still, according to the 2010 State of Forests Report, “the most important export commodity accounting for 30% of the total value of B.C. goods exports in 2009.” Despite sharp declines in employment over the past decade, the forest products industry still provides nearly 60,000 direct jobs. For a Premier focused on creating jobs, the absence of a strategy that includes measures for the forest sector is surprising.

The only conclusion I can draw is that the Clark government simply does not see the problems of the forest sector as something the government has the tools to address at this point in time. No doubt, the rejuvenation of the softwood lumber conflict contributes to the wariness of an already reticent government.