Had enough of the read-world farce of the Durban climate talks? Check out this climate change satire by one of the great novelists our time: Ian McEwan’s Solar (2010) 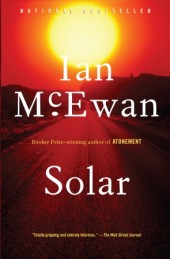 The Seventeenth Conference of the Parties to the UN Framework Convention on Climate Change just concluded with a “plan for enhanced action” in which we’ve agreed to agree at some later point to “raise levels of ambition” and “close the ambition gap.” If we are going to turn the struggle for climate action into a farce, it makes more sense to look to the professionals. One of the great writers of our time, the UK’s Ian McEwan, has written a cutting, insightful satire about climate change. His book was inspired by the farce at COP15 in Copenhagen, but rings just as true in the wake of COP17.

Solar is centered on the unlikable protagonist Michael Beard, an English physicist who won the Nobel Prize for his pathbreaking “Beard-Einstein conflation.” Beard’s physical appetites are just as prolific as his mental faculties, and have jointly turned him into an overweight egoist. Beard’s consumption patterns are described in painful detail, as he goes through food, drink, and women with little thought to the consequences.

McEwan has a keen eye for the disciplinary dynamics of intellectuals. One scene in the book has Beard acting as the token climate expert on a boondoggle cruise to the Arctic with artists and musicians. McEwan’s depictions of the personal interactions are packed with insight into the “two cultures.” The book also has a devastating indictment of past-their-prime academics as Beard flagellates himself for the “pseudo work he did to mask his irrelevance.”

As the novel progresses it becomes apparent that Beard’s attitude towards consumption serves as an allegory for humanity; his overeating (and other habits) can be likened to our overuse of finite resources and destruction of the natural world. As Beard’s gluttony-induced health problems increase, his doctor tells him “I’m afraid we really must address your lifestyle.” But McEwan’s protagonist won’t listen, because his lifestyle is too important to him. He also uses the creeping chaos of the boot room of the Arctic cruise ship as an apt metaphor for the tragedy of the commons at the centre of the climate dilemma.

However, the book is not simply metaphor, nor does it read like a morality tale. Through a series of mishaps and lies, Beard accidentally turns into a crusader to thwart anthropogenic climate change, as he becomes the voice of a project with the goal of turning solar power into the most important renewable energy source through artificial photosynthesis. (Go here for a real world version.)

It is this plot convolution that makes the novel so fascinating, as tension between Beard the overweight and at times ridiculous hedonist, and Beard the rational physicist whose project could potentially save the world, somehow match up. There is an especially striking scene where Beard is pushed to give his most convincingly passionate speech about the ailments of our planet because he needs to rush off the stage to vomit a gluttonous second lunch.

McEwan’s Solar is about the climate crisis but its characters and plot are also metaphors for the humanity’s apparent unwillingness to address global warming.

This is our first blog that looks at environmentally-relevant fiction. Fiction as a metaphor for environmental challenges is one genre of environmental literature. Others include:

This entry was posted in Environmental Fiction. Bookmark the permalink.