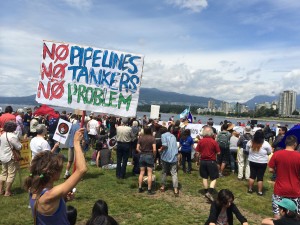 The next big thing in the battle over the Northern Gateway pipeline happens by June 17, when the Harper cabinet’s decision on the National Energy Board’s recommendation to approve the pipeline (with conditions) is due. What’s likely to happen next?

It’s useful to think about the Northern Gateway conflict as involving four stages. We’ve completed the first regulatory stage, where the project has been submitted and undergone regulatory review. We are now in the second stage, on the cusp of a decision by the elected officials with legislative authority over pipeline approval. When that’s done, there are two more stages: the legal stage, and the on-the-ground stage.

In my view, the odds are still with Harper endorsing the NEB recommendation. He’s invested a great deal politically in getting oil sands access to Pacific markets, and to walk away from the project would be acknowledging a major defeat. But a yes decision is by no means a slam dunk, for several reasons. First, Harper needs to win the next federal election, and public opinion in BC is not favourable to pipeline approval, which puts the 21 Conservative seats at greater risk.

Second, we haven’t heard from Christy Clark and the government of British Columbia on its position on the pipeline in quite some time. If the Clark government remains opposed (its current formal position is that the project does not meet BC’s famous five conditions), it would be very costly politically for the Harper government to approve it.

Finally, there is no evidence that the adamant opposition of First Nations in BC has changed. From the beginning, First Nations opposition has always been the biggest threat to the project. If Enbridge or the government hasn’t been able to turn that around, approving the project will set back relations with First Nations even further, and jeopardize other resource projects important to the Harper government.

Harper essentially has three choices. He can accept the NEB recommendations and conditions. He can reject them, which would kill the project for the time being (Enbridge would be able to propose the project again at a later date). Or he could pull an Obama, and simply put off making a decision about the pipeline.

The National Energy Board Act gives cabinet the authority to accept or reject the recommendation decision of the NEB but cabinet cannot alter the terms and conditions the NEB recommends. The cabinet can, however, ask the NEB to reconsider its terms and conditions, and give it a new deadline. It can actually do so repeatedly. So if Harper wants to simply buy more time, he can do so by asking the NEB to reconsider. (Updated: Or, as was pointed out by James Coleman at the Calgary Law School, he can just extend the deadline indefinitely under Section 54(3).)  Doing so would be a major about face for the Prime Minister who rammed a streamlining of the regulatory review process through Parliament in 2012, and who has been so critical of Obama for failing to bring finality to the Keystone XL decision. But in some ways it would be the most politically graceful move given the painful choices Harper confronts.

What Happens if Next if Harper Says Yes?

The Federal cabinet decision is the most important decision point in this political stage of the Northern Gateway conflict, but it is not the only one. BC’s Premier Clark would still need to weigh in. It would be very difficult for Clark to move to yes on Northern Gateway without a major shift by either Enbridge or the federal government on BC’s demand of a “fair share of the fiscal and economic benefits.” So one thing to look for as part of a yes decision by Harper is whether big new developments occur on sharing economic benefits with BC. Even if that condition gets satisfied, however, Clark will be risking a major political backlash, if she endorses the project, given the political strength of opposition to Northern Gateway in BC. If Clark takes a stand and says no, the pipeline can only proceed if Harper is willing to go to war with BC politically and constitutionally. Given the importance of BC’s 21 seats to the Conservative’s chances for success in the 2015 election, that seems unlikely.

If Harper and Clark both say yes, then look to two other major decision points. The Dogwood Initiative is poised to unleash a citizens initiative to ban tankers from the Pacific coast. While the process is stacked against initiatives, a strong showing of support in the campaign would send shock waves through the electoral process.

And then there’s the proponent, Enbridge. The company has the option of sitting on the license and continuing to work with First Nations to see if it can reduce opposition to the project. If the company chooses to proceed, then we move to the third, legal stage of the conflict.

There are already five legal challenges filed against the NEB decision to recommend approval, two by environmentalists, three by First Nations. More are anticipated if the Harper cabinet says yes. It will take a year or more to resolve these cases; this dispute seems destined for the Supreme Court of Canada. The courts could enjoin Enbridge from proceeding before the issues are resolved. If they don’t, Enbridge could still choose to take a pause until they are resolved.

But if Enbridge puts one shovel in the ground in BC to initiate pipeline construction, we’ll enter the fourth, on-the-ground stage of the conflict.

If legal approvals get put in place and Enbridge proceeds, there will be a grand battle on the ground between the company and pipeline opponents. I believe a decision to proceed with the pipeline will result in civil conflict beyond what Canada has experienced in modern times.  I was at yet another rally today in Vancouver against the pipeline where senior First Nations leaders stated that they would use every legal means to stop the pipeline, and if that failed, their people would take “matters into their own hands” to stop the pipeline. If it comes to this on-the-ground stage, the nightly news will be filled with RCMP dragging aboriginal elders off of roads, and continuous physical and legal confrontations between police and opponents. It will make the Clayoquot Sound conflict look like a tea party.

This conflict over a pipeline continues to manifest the struggle over the definition of Canada moving through the 21st century.

This entry was posted in Energy Pipelines, Oil Sands. Bookmark the permalink.