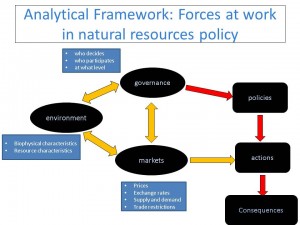 Policies are the rules produced by government designed to influence actions. Policies can be thought of as bundles of objectives or goals, instruments, and settings on those instruments. For example, in the area of climate policy, we could have an objective to reduce greenhouse gases by a certain amount by a particular time, an instrument of a carbon tax, and a setting of that carbon tax of $40 per tonne of carbon dioxide equivalent.

Policies are produced through governance processes, influenced by environment and markets. Governance is the structure and process through which policies are decided. It consists of three core components:

By environment, we’re referring to the physical-material world, particularly biophysical and resource characteristics. Climate, for example, would be part of this variable, as would the content and quality of reserves of a particular energy source like goal or natural gas, or the quality and quantity of the standing timber stock or species habitat in a landscape. The state of available technology is also included in this variable.

With markets, we are referring to a wide range of economic variables, including prices and quantities and exchanges in the marketplace, driven by the relationship between supply and demand.

The “forces at work” framework emphasizes how these three categories of variables interact with each other to produce policies, that influence the actions of business and consumers that produce the consequences to the values of concern to us.