Two cheers for Trudeau’s climate plan – the best a climate hawk could expect out of a Liberal leader named Trudeau? 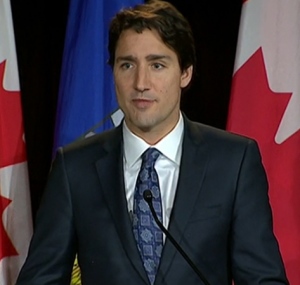 In a speech to the Petroleum Club in Calgary yesterday, Liberal leader Justin Trudeau gave more details about what climate policy his party would pursue if they form the government after the October 2015 federal election.  He announced that the federal government would, in cooperation with the provinces shortly after the Paris climate summit in December, establish a national target for greenhouse gas reductions. But it would be up to the provinces to choose their own approach to reducing emissions.

For the perspective of a climate hawk, this is a significant improvement over the indication several weeks ago that he would leave carbon pricing to the provinces. Without a binding national target and a federal effort to coordinate compliance with the target, deference to provincial policies would not have improved on the status quo. But in his Calgary speech, Trudeau made very clear that the federal government would play this coordinating role under his leadership.  For me, that is a major breakthrough.

But there is much that Trudeau did not specify. For one, he didn’t mention anything about what the national target would be, only that they would be  “informed by the best economic and scientific analysis.” (The US announced in October a new national target of 26-28% below 2005 levels by 2025.) He also didn’t say anything about what will turn out to be the most divisive part of his policy – how to allocate province-specific reduction targets. This gap is particularly important, because a well-designed national cap and trade system or carbon tax would not require the allocation of province-specific emission reduction targets. The emission responses of provinces would be determined by how prices and/or exchanges influenced the behaviour of emitters as they adapted to the new price of carbon.

While I’m disappointed with Trudeau’s unwillingness to work on the development of a national plan, listening to his speech reveals that his proposal is quite artful politically. He carries special baggage, as he explicitly noted in his speech, because of his father’s 1980 National Energy Program that poisoned both his name and his party in Alberta, whose cooperation is necessary if any Canadian climate policy is going to be effective.  He’s addressing at least part of that toxic political legacy by letting the provinces choose the policy instrument that works for best for them.

At present, the provinces essentially have three different mechanisms for carbon pricing in play. British Columbia has it revenue-neutral carbon tax, Alberta has its hybrid regulation-tax, and Quebec has a cap and trade system. Ontario recently announced that it would be introducing a carbon pricing system but is not indicating whether it will go in with Quebec or pursue a carbon tax.

If we have a national target that actually has teeth and is a meaningful contribution to global efforts, the inconsistency among provincial approaches will become problematic. If you have a cap and trade system, you want as large a market as possible to trade in, so there are real incentives to spread it nationally. Moreover, if there were different prices on carbon across the country, questions of fairness and competitiveness would inevitably arise.  One outcome of the Trudeau approach is that a nationally coherent plan could emerge out of intergovernmental discussions after the October election. Much will hinge on what Ontario decides to do; Wynne’s instrument choice could be pivotal in getting either Quebec or BC to reconsider their approach. For now, Trudeau is betting that his worst mistake would be to be perceived as imposing the preference of the federal government on the provinces.

By not forcing the provinces to adopt a national policy instrument, Trudeau would avoid a political challenging choice. But he also creates another – the need to allocate province-specific targets. At the end of the day, Trudeau’s approach trades one politically difficult decision for another. But in the Harper era, it may be the best a climate hawk could expect out of a Liberal leader named Trudeau.