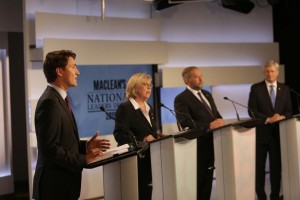 Pipeline and climate issues took central stage in last night’s leader’s debate hosted by Maclean’s. There are five main takeaways from the debate. You can watch the debate here, and read transcripts from it here at Maclean’s. All the quotes below are taken from the Maclean’s transcription.

The most remarkable thing about last night’s debate is the simple fact that the party leaders spent about one-fourth of their debate on energy and climate issues, a striking change from the 2011 federal election debates where energy and environment was largely ignored. The profile of these issues is a clear indication of the remarkable success of First Nations and the environmental movement in forcing these issues onto the political agenda.

Most of the focus of this debate segment was on attacks on Harper’s environmental record by the other three party leaders, although there were noteworthy exchanges and differences among the opposition party leaders as well. Mulcair and Trudeau made almost identical argument that Harper’s poor environmental record had undermined social license for new energy projects and, as a result, hurt the economy.

“[N]ot only has he not helped our environment, but he’s actually slowed our economy. He cannot get our exports to market because there is no public trust anymore. People don’t trust this government to actually look out for our long-term interest. We – he hasn’t convinced communities of the rightness of his – his pipelines, of the proposals he supports. He hasn’t been working with First Nations on the kinds of partnerships that are needed if we’re going to continue to develop our natural resources. Canada will always have an element of natural resources in our economy, but the job of the Prime Minister is to get those resources to market. And in the 21st century that means being smart and responsible about the environment. Mr. Harper’s inability to understand that is exactly why he’s so struggled to actually get our economy growing in a right way anymore.”

Mulcair taunted Harper about his record of getting pipeline projects approved:

“Mr. Harper thought that by gutting our environmental laws, somehow he could get our energy resources to market better. How’s that working out, Mr. Harper? None of those projects has gotten off the drawing board, and it’s not hard to understand why. Canadians across the country want a clear, thorough, credible environmental assessment process. Canada can be a leader around the world. We can play a positive role. But with Mr. Harper, we’ve got the worst of all worlds. Dirtier air and water, we’ve got more carbon pollution, and we’re a laggard on the world stage.”

“The reason environmental groups in Canada and across the United States are so concerned about Canadian oil is because Mr. Harper has turned the oil sands into the scapegoat around the world for climate change. He is – has put a big target on our oil sands, which are going to be an important part of our economy for a number of years to come, although we do have to get beyond them. And his lack of leadership on the environment is hurting Canadian jobs and Canadian relations with other countries.”

Of course that’s not quite right. It’s the environmental movement that has succeeded in framing the oil sands expansion as a major climate risk. Harper has contributed to the stigmatization of the sector by failing to take any meaningful climate action on Canada’s oil sector.

While the opposition leaders were singing the same song about the link between Harper’s environmental policy retrenchment and the failure of his oil sands export strategy, there were important differences in their positions on the merits of exporting raw bitumen. Trudeau supports Keystone XL, but Mulcair and May both oppose it. Mulcair stressed this difference with the Liberal leader: “Mr. Harper and Mr. Trudeau both agree with Keystone XL, which represents the export of 40,000 jobs. I want to create those 40,000 jobs here in Canada.”

Mulcair and Trudeau had an embarrassing exchange accusing each other supporting Energy East in English and opposing it in French. You could almost hear Harper laughing. May emphasized her opposition to Energy East, stating it “is still about export.”

May sought to drive a wedge between the NDP and environmentalists in BC by demanding to know whether Mulcair opposed the Kinder Morgan pipeline. Mulcair re-articulated his nuanced position that he would wait until the regulatory review was complete. But of course he did not do that with Northern Gateway, which he opposed long before the environmental assessment was completed. That exchange led to flashbacks of the 2013 BC election, where NDP leader Adrian Dix (remember him?) began the campaign with the same position, and disastrously changed it mid-campaign. Mulcair’s probably too smart to make the same mistake.

4. Opposition leaders need to bone up on their understanding of GHG trends

Harper has little credibility on the environmental file, and opposition leaders mocked him for it. When Harper described his climate record, May chimed in “That’s not true!” And a bit later Trudeau blurted out “Nobody believe you!” The problem is that what Harper was saying at that point was correct: “Mr. Trudeau, let’s be clear on what the record actually is. Not only do we take both the economy and the environment seriously; we are the first government in history to reduce greenhouse gas emissions while also growing our economy.” Nic Rivers, economist at the University of Ottawa, provided the numbers, direct from Environment Canada.

It is true, as May later emphasized, that the main reason for the decline was the great recession and the policy actions taken by provinces, especially Ontario. It is also true that there has been a steady rise since the 2009 nadir, and that the Harper government’s own projections show them continuing to increase substantially as the oil sands sector expands. But it is also unquestionably true that emissions for the latest year we have data (2013) are lower than when Harper took office, despite economic growth over that period.

There’s plenty of dishonesty in Harper’s statements on energy and environment to criticize. In the debate, he said more than once that Mulcair is opposed to LNG in BC, when that is not his position. His continued castigation of his opponents for pushing a carbon tax (discussed below) is another obvious example. But the opposition leaders should sharpen their understanding of and arguments about carbon emission trends.

5. Harper continued his silly demagoguery against the carbon tax, and no one responded

Since he feasted on Stephan Dion in the 2008 election, Harper has gleefully bludgeoned opponents for supporting a carbon tax. In last night’s debate, he persisted:

“The way you don’t deal with this problem is start imposing carbon taxes that will inevitably – they raise money for the government. They don’t reduce emissions. They hit consumers, and they hit consumers hard…Paul, I’ll say what I’ve said to people across the country: a carbon tax is not about reducing emissions. It’s a front. It is about getting revenue for governments that cannot control.”

There are several problems with this statement. First, while May’s fee and dividend is a carbon tax, the two main opposition parties aren’t supporting a carbon tax. Mulcair advocates cap and trade. Trudeau would let the provinces choose their instrument. More importantly, the argument that they don’t reduce emissions and are only a front for padding government finances is just not supported by the record. BC’s carbon tax has been held up as an international model of a revenue-neutral (meaning it does not raise government revenues) carbon tax that has reduced emissions while the economy grew substantially. It is true that you could use carbon pricing to increase government revenues, and there are pros and cons of doing so. But Harper’s argument that it’s a front for padding government treasuries is sheer demagoguery.

What surprised me is that not one of the three opposition leaders chose to defend carbon pricing. I’m not sure whether this is because they see defending carbon pricing as a no-win strategy against Harper, or they just chose to focus their arguments elsewhere. Whatever the reason, we ended up with a debate heavy on pipelines and remarkably unilluminating on climate policy. A basic word search shows climate issues were out-mentioned by pipelines 43-28.

Nonetheless, congratulations to Paul Wells and Maclean’s for fostering a vigorous debate on these important issues.