What Issues Mattered in the 2013 British Columbia Election? Some Context on the Kinder Morgan Surprise 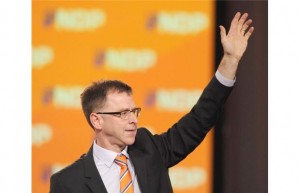 Everyone’s still trying to make sense of the stunning comeback upset by the BC Liberals. Much attention has been focused on differential turnout and the unwillingness of the NDP to “go negative” in response to the relentless attacks by the Clark campaign. I want to put a word in for issues, because one general pattern in elections is that parties who are favoured on the issues of greatest importance to voters have a strong advantage. An analysis of issue salience and public attitudes towards parties on issues also helps shed light on the impact of the Kinder Morgan surprise that seems to have been an important moment in the campaign.

Ipsos-Reid published the results of a poll of 1400 BC voters on election day. Here’s a table of the list of issues ranked by the percentage of election day poll respondents who said the issue was “very important” in the respondent’s “vote decision.” The table also show how voters who ranked the issue that way voted for the two leading parties, with the final column showing the Liberal advantage over the NDP on that issue.

It is a bit surprising that on three of the five top issues – open and honest government, health care, and trust in the leader or party – the NDP had an advantage. It’s also surprising that Dix ended up with a trust advantage despite the BC Liberals’ relentless attacks on his character and judgment. The problem for the NDP, however, is that the Liberals’ advantage on the economy (ranked second) and the government spending (ranked 5th) were far larger than the NDP advantage on their top 3 issues. Liberals won those concerned about the BC economy by 23 points and those concerned about government spending by 20.

The survey did specifically list “pipeline expansion projects” as an issue in the survey – it was ranked 11th as an issue with 39% of voters saying it was important In their choice. Remarkably, the Liberals had a modest advantage on that issue. Those who listed pipelines as an important issue in their vote seem to have favoured Clark’s “five conditions” policy to Dix’s opposition.

You have to go pretty far down the list to find environment – it is ranked 14th with 36% of voters saying it was important in their voting decision. The NDP had a huge 25 point advantage with those voters.

It doesn’t seem like this result was inevitable. If Dix had successfully framed the decision differently – for example by focusing more on “saving our coast” or “standing up for the BC environment” it might have been less disadvantageous. But the Clark campaign was far more effective at winning the framing battle on the issue. One core insight from those who study framing in election is that you want to ensure voters are focused on the issues on which you have an advantage. The Kinder Morgan surprise turned out to be an unexpected gift to the BC Liberal campaign.

This entry was posted in Energy Pipelines. Bookmark the permalink.

One Response to What Issues Mattered in the 2013 British Columbia Election? Some Context on the Kinder Morgan Surprise