Congratulations Elinor Ostrom on Your Nobel Prize in Economics! 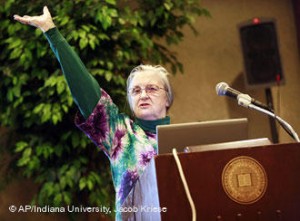 GreenPolicyProf wants to send a major shoutout to Elinor Ostrom, the co-winner of this year’s Nobel Prize in Economics.

Ostrom’s award is notable for several reasons. First, she is the first woman to win the prize in economics. Second, while a number of previous Nobel prize winners were given their awards for their contributions to the understanding of political behavior (e.g., Buchanan), she is the first recipient of the economic prize to actually be a political scientist by training.

Most importantly, she was given the award for her contributions to governance for sustainability. Her most influential work has explored the conditions under which local users of natural resources can develop effective mechanisms for ensuring sustainability. According to the Nobel committee,

Elinor Ostrom has challenged the conventional wisdom that common property is poorly managed and should be either regulated by central authorities or privatized. Based on numerous studies of user-managed fish stocks, pastures, woods, lakes, and groundwater basins, Ostrom concludes that the outcomes are, more often than not, better than predicted by standard theories. She observes that resource users frequently develop sophisticated mechanisms for decision-making and rule enforcement to handle conflicts of interest, and she characterizes the rules that promote successful outcomes.

The Nobel committee’s provides descriptions of her work designed for the public and for specialists,

One Response to Congratulations Elinor Ostrom on Your Nobel Prize in Economics!