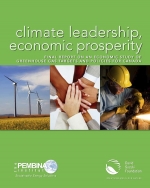 This week the Pembina Institute and the David Suzuki Foundation jointly released a report that finds that Canada can meet its greenhouse gas emissions reduction target – and even more stringent goals – without bringing the economy to a halt. While acknowledging that the policies necessitated by emissions reduction targets will have different effects for different provinces, the report emphasizes that the impact on economic growth for even the most carbon-intensive provinces will be relatively modest.

As expected, the report has prompted hyperbolic responses from the defenders of Canada’s fossil energy establishment:  several Western provinces, federal Minister of the Environment Jim Prentice, and the Globe and Mail editorial board. Prentice characterized the report’s findings as “irresponsible” and stressed that Canada could meet its targets through other means, namely by harmonizing its climate change plan with the United States’ as-yet-unfinalized plan. He also made it clear that the costs of any emissions reduction plan must be acceptable to all regions of the country. Such agreement over an effective climate action plan is all but impossible as long as Alberta refuses to “touch the brake” on its oil sands operations. And even before factoring in provincial reactions, such hyperbole coming from the federal Minister of the Environment casts doubt on the sincerity of Canada’s commitment to its own greenhouse gas emission reduction target by 2020.

Politicians from Alberta and Saskatchewan were even more vocal in their opposition to the report. Alberta premier Ed Stelmach denounced the report’s recommendations as nothing more than a wealth transfer to other parts of the country: “There won’t be another wealth transfer to Ottawa under my watch. There is already one wealth transfer program and that’s equalization.” Saskatchewan Energy Minister Bill Boyd echoed Stelmach’s “wealth transfer” theme, adding that technology is the key to combating climate change. Alberta and Saskatchewan have placed large amounts of faith and money in carbon capture and storage (CCS) technology, despite questions surrounding its reliability and cost-effectiveness. Recently the federal government has joined in, pumping $343-million into a CCS-equipped coal-fired generation plant in Wabamun, Alberta while declaring that “Carbon capture and storage has the potential to help us balance our need for energy with our duty to protect the environment.”

This dismissive and defiant rhetoric is part of a long history of resistance and denial that at some point Canada, and especially Alberta, would need to reconcile its energy and climate policies with modern notions of sustainability and, especially, an evolving international climate regime. The ghost of the National Energy Program has given Western provinces a de facto veto over national climate change policy.

National newspapers joined the condemnation. The lead Globe and Mail editorial yesterday denounced the report:  “its all-out attack on the oil and gas sector is politically and economically unacceptable, and would euthanize a vital Canadian industry.” It says the report’s policy recommendations are “unsaleable and dangerous.” In its most extreme rhetoric, it proclaims “Canada cannot take its national unity for granted and must not, in the service of international obligations, allow itself to be immolated by a government policy of such wrenching dislocation.”  The National Post editorial board joined in the hyperbole, rejecting the report because it “would shake the very pillars of Confederation.” A National Post commentary joined the editorial excess, claiming “there will be blood.” Reactions from farther west are not so shrill. Vancouver Sun columnist Craig McInnes claims the report demonstrates that “with a political will, there’s a way.”

Pembina and DSF enlisted MK Jaccard and Associates (MKJA) to consider the feasibility and cost of two greenhouse gas emissions reduction targets: 1) a 25 percent reduction below 1990 levels by 2020, as proposed by environmental NGOs (ENGOs), and 2) a 20 percent reduction below 2006 levels by 2020, the Canadian government’s proposed target. Both scenarios were found to be feasible, though only with significantly stricter policy packages than those proposed thus far by the provincial and federal governments. Of particular interest are the carbon dioxide equivalent emissions prices under each scenario: $50/tonne in 2010 rising to $200/tonne in 2020 under the ENGO scenario, and $40/tonne in 2010 with an increase to $100/tonne in 2020 given the government’s target.

Unfortunately, even the stringent policy packages proposed by MKJA (including carbon pricing) are not enough to reach the emissions reduction targets in either scenario.  Thus, the policy package examined by the authors includes purchasing of international offsets, pursuit of carbon capture and storage (for the environmental option), and a number of other policy responses to close the gap.

Under both scenarios, the report projects that Canada will experience significant economic growth, but not quite as much as it would under the “business as usual” (BAU) scenario of no new controls. Under the BAU scenario, Canadian GDP is projected to grow 27% by 2020. Under the scenario implementing the Government of Canada’s target, GDP would grow 25% by 2020, and under the environmental group target scenario, GDP would grow 22%. The changes in GDP growth are projected to have different affects on different provinces. Growth will be less than projected under BAU in all regions except Manitoba and Ontario. The gap between GDP under both policy scenarios and under BAU is by far the largest in Alberta at 8% under the government scenario and 12 percent under the ENGO scenario.

As the report clearly shows, effective climate action is possible in Canada without plunging the country, or even the Western provinces, into economic chaos. The report’s authors should be congratulated for advancing the climate policy debate in Canada. By conducting serious economic policy analysis on what needs to be done to significantly reduce Canada’s greenhouse gas emissions, they have spoken truth to power. In so doing, however, they’ve exposed the hypocrisy of Canada’s persistent claims that it is committed to emission reduction targets without having a plan or the political will to do meet those targets. By being transparent about the regional impacts of climate policies, the report also challenges the foundation of political-economic power in the West, and provoked a formidable rhetorical backlash.

If Canada wants to be a responsible member of the international community, it will need to reduce its greenhouse gas emissions, and do so significantly and relatively quickly. This cannot be done without significantly raising the cost of energy production from fossil fuels, including the oil sands as well as coal and natural gas. The Canadian economy will need to adjust to these changes, and the impacts of these costs will have differential impact on regions, just as the regional endowment of fossil energy and the wealth generated from that has had differential impacts on regions. The fact that some areas in Western Canada will not grow as much as they might otherwise cannot be used as a justification for failing to act on our generation’s greatest challenge.