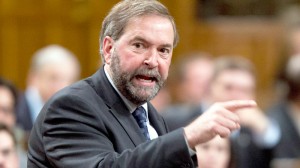 Today the Pembina Institute released a study contributing to the growing expert consensus that Canada has a mild case of Dutch disease. Later this week, NDP leader Thomas Mulcair is travelling to Western Canada to further argue his own unique form of Dutch disease.

What a difference a month can make.

Six weeks ago we argued that there is a political narrative available to environmental advocates looking to find a coalition between themselves and the labour movement, which can also drive a wedge in Stephen Harper’s Western Canada-and-Ontario coalition that gave him a majority in the 2011 election: the Dutch disease argument that a rising petrodollar makes Canadian manufacturing exports more expensive and has created a decline in Ontario’s manufacturing sector.

Since then several events, both extraordinary and coincidental, have turned Dutch disease into the most significant policy debate the country is facing. It began with Mulcair, on CBC’s The House:

“It’s by definition the Dutch disease: the Canadian dollar is being held artificially high, which is fine if you’re going to Walt Disney World; not so good if you want to sell your manufactured product because the American client, most of the time, can no longer afford to buy it. We’ve hollowed out the manufacturing sector. In six years since the Conservatives have arrived we’ve lost 500,000 good-paying, manufacturing jobs; more than half of them because we’re not internalizing the environmental costs.”

Mulcair’s comments set off a firestorm of controversy, putting him on the opposite of most political pundits, many economists, the government, and the Western premiers.

Coincidentally, little more than a week after Mulcair’s interview on The House, the Institute for Research on Public Policy released a report evaluating the significance of the Dutch disease. Specifically, the authors noted there has been “little rigorous analysis of the linkages between energy prices, the exchange rate and manufacturing output in Canada.”

For the second conclusion, an analysis of 80 manufacturing industries was conducted and, while 53 out of 80 indicated some level of Dutch disease, only 25 were statistically significant while the rest were functionally the equivalent of no relationship as all. Interestingly, while there was no negative relationship for automotive manufacturing, the biggest negative effects were in textiles, apparel, and leather, “which together account for less than 2 percent of manufacturing output.”

Inconveniently for the Harper Government, it was also revealed recently that an Industry Canada sponsored study being published in the journal Resource and Energy Economics, found some support for loss in manufacturing employment due to Dutch Disease. Unlike the IRPP study, the Industry Canada study looked at losses in manufacturing employment. It concluded that, of those jobs lost to exchange rate fluctuations, 33-39% is due to increases in energy commodity prices. However, given the results of the IRPP study, we can reasonably assume that this constitutes a much lower loss of employment than the headline numbers suggest.

Using regional economic impact models produced by the Canadian Energy Research Institute, the Pembina Institute argues that large regional disparities are occurring as a result of the oil sands boom. In fact, the authors of the Pembina study reject the Dutch disease label as inadequate to capture what is happening in Canada today. Instead, they argue the distribution of benefits and rapid growth is “a uniquely Canadian strain of the Dutch Disease that could be called “oilsands fever” – a strain that is beginning to create clear winners and losers in Canada’s economy and could pose a significant risk to Canada’s competitiveness in the emerging clean energy economy.”

The authors emphasize the challenges facing provinces without significant natural resource production in attracting and retaining skilled labour in, the overwhelming hold on the economic benefit from oil sands production (94%) by Alberta alone, and the inflationary effects. Their prescriptive elements include establishing a federal savings fund, eliminating preferential tax treatment for the oil and gas sector, convening an expert panel of the Royal Society of Canada to continue study of the problem, have a federal committee study regional competitiveness, and establish a Canadian energy strategy.

However, the waters of the Pembina report have already been muddied by a MacDonald-Laurier Institute report arguing the opposite conclusion from the same data by the Canadian Energy Research Institute. MLI finds a significant positive impact from the oil sands, in absolute terms, for every province in the country.

The two studies are using the same data. The different conclusions from the reports reflect the different perspectives of the groups. MLI emphasizes the absolute magnitude of the contributions of oil and gas to provinces outside of Alberta. Pembina doesn’t disagree, but emphasizes the economic and political effects of the unbalanced distribution of these benefits, an issue on which MLI is silent. Neither study can convincingly say whether the positive economic spillovers of the oil sands are more or less powerful than the negative dynamic of the Dutch disease. Even MLI’s concluding sentence reveals how incomplete our understanding of these competing forces is: “While the so-called “Dutch Disease” mechanism may operate, in practice it is partially (perhaps more than fully) offset by the gains to the overall Canadian economy documented by these studies.”

Analysts will continue to differ about the magnitude of the Dutch disease dynamic and whether and how policy changes should be made to address it.

Mulcair, Polluter Pays, and Gaps in the Research

Returning to Mulcair’s comments on the CBC and elsewhere, in discussing the Dutch disease he continually emphasizes the critical importance of applying the polluter pays principle. In doing so, Mulcair is describing something that is similar to, but not exactly, Dutch disease, and calling it the same. He claims that Dutch disease occurs when you fail to internalize the environmental costs of resource extraction; specifically, because companies do not have to pay the full cost of greenhouse gas emissions and other environmental impacts, they are able to develop resources at a faster rate than they would otherwise be able to do, and therefore putting more upward pressure on the dollar than would be the case if the costs were properly internalized.

This argument about internalizing environmental costs is Mulcair’s own distinctive addition to the concept of Dutch disease.  Unfortunately, none of the studies summarized above actually deal with the argument that Mulcair is making, leaving a giant hole in the current research.

Climate Hawks and the Dutch Disease

It is particularly surprising that the Pembina report does not address the polluter pays part of Mulcair’s argument because the environmental impact of the oil sands have been central to the group’s mission, and placing an effective economy-wide price on carbon seems to be the natural go-to recommendation in all the group’s reports on the topic. Why would Canada’s leading climate hawk environmental group pass up the chance to make the case for effective carbon pricing in another politically salient way?

We can only speculate that they believed including it would produce an undesirable political backlash. They are already well-known for having that position, and when they have made the case for effective carbon pricing in the past they have been accused, like anyone else who mentions the idea in Canada, of advocating regional wealth distribution. And perhaps because Mulcair’s comments have been considered so incendiary, emphasizing the polluter pays component would have associated the group too closely with a divisive partisan argument.

The dilemma faced by Pembina in this report is a dilemma for many climate hawks: does it make political sense to embrace the Dutch disease narrative? Analytically, it would seem preferable to keep the issues separate. Designing effective climate policy for Canada is an enormous task in its own right, why complicate it by including it in the same package of initiatives designed to address Ontario’s struggling manufacturing sector? Even the strongest serious cases for the Dutch disease argument suggest that there are greater and more important forces at work in Canada’s manufacturing challenge than the explosive growth of the oil sands.

But politically, climate advocates are not getting any meaningful traction in Canada, so aligning themselves with the Dutch disease argument makes sense if Mulcair’s political strategy can be a winning one. Nik Nanos, one of Canada’s preeminent pollsters, believes this is a high reward manoeuver for Mulcair, who is looking to shore up support in Quebec and expand into Ontario, for much of the same reasons as were previously discussed in this blog.

While Mulcair’s rhetoric may be beyond what is well supported by economic analysis, as noted by John Ibbitson he probably does not have much to lose from adopting more extreme positions than the evidence warrants (yet). A sizeable portion of the public agrees with his viewpoint – enough to make a difference in key areas. According to Harris/Decima, 51% in Quebec agree with Mulcair in Quebec, while 47% in British Columbia and 37% in Ontario do.

If the choice comes down to oil sands expansion with demonstrably inadequate environmental checks and balances, or a sketchy economic argument with powerful narrative potential, the choice seems pretty clear for climate hawks.