It’s time to draw a line in the sand: Why I’m protesting against oil sands pipelines 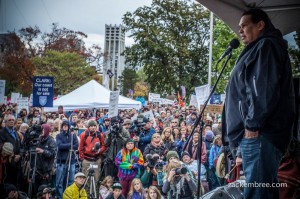 Note: there was a packed agenda at the epic Defend our Coast rally in Victoria on October 22, 2012. I was asked to speak but in the end time didn’t permit. Here’s the text of the speech I would have given.

What’s a professor doing here? I’ve got to tell you I’m out of my comfort zone. But what I’ve learned and what I teach compel me to be here. Pipeline or tanker accidents would be a disaster for our rivers and coast. But even if the oil arrives safely at its destination, it will still contribute significantly to the environmental disaster of dangerous global warming.

The Northern Gateway Pipeline, the Kinder Morgan Pipeline – they’re pipelines full of carbon. And they carry a lot of it. If these pipelines are built, they’ll be contributing more than twice as much carbon pollution every year than we currently emit within B.C.

Add that to the coal and liquefied natural gas, and the fossil fuel industry, with government backing, wants to turn our province into a gigantic carbon pipeline to growing markets in Asia. If all the carbon export projects currently on the books in BC get approved, by 2020 our carbon exports will be 10 times our carbon pollution within the province.

The planet can’t afford that. And we have a special responsibility, at this place, at this time, to just say no to these projects. Now is the time to draw a line in the sand.

Scientists are telling us that we face a planetary emergency. If we stay on our current fossil fuel energy path, there’s a virtual certainty of catastrophic climate change.

Science also tells us it’s not too late to change course, to avoid the worst effects. But it’s getting very late. According to the International Energy Agency, we only have 5 years to begin a fundamental transformation of our energy system.

Let’s start here. We simply can’t afford to lock-in more climate warming pollution by building massive new fossil fuel infrastructure like these pipelines. Now is the time to draw a line in the sand.

I’m one of a growing number of scientists and other academics who are climbing down from the ivory tower and getting involved in political activism.

The past two decades of climate politics has taught us that the old model of the role of the scientist — “speaking truth to power” — has just not worked.

Those in power don’t listen to the truth if it’s politically inconvenient. In our system the only things that speak to power are money and votes. We don’t have the money, but we can mobilize votes, and that’s why we’re here today:  To show politicians the depth and breadth of opposition to these carbon pipelines.

There’s a time for research. There’s a time for public lectures, for op-eds and petitions. But there’s also a time for more direct action. To stand up for what is right. And that’s why we’re here today. Now is the time to draw a line in the sand.

What climate science teaches us is that we face a crisis. What political science teaches us is that global warming is an enormous political challenge. The complexity and magnitude of the issue seem to overwhelm us. The tragic fact is that if we are guided by short term economic thinking, humanity will simply not be capable of rising to the challenge of taking the concerted action sufficient to avoid dangerous global warming.

The planet can’t afford these new pipelines. We don’t want to profit from them. We have a moral responsibility to say no. Now is the time to draw a line in the sand.

One Response to It’s time to draw a line in the sand: Why I’m protesting against oil sands pipelines