Should Scientists be Advocates? The Case of Dr. James Hansen 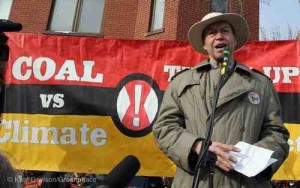 Hansen at a coal mining protest, where he was arrested.

The appropriate relationship between science and politics has been a persistent challenge for modern governance. Sound policymaking relies on mobilizing expertise, so scientists are frequently called upon to become involved in the political process. Expertise is also a political resource, so politicians and interest groups use science and scientists as part of their political strategy. As a result, science becomes politicized, creating risks for both the political process and the role of science (Mills, 2000; Lackey, 2006).
One of the most challenging dilemmas in the science-policy interface is whether scientists should be advocates, and if so under what conditions. This blog explores that question by looking at the controversial case of Dr. James Hansen. Hansen, head of the NASA Goddard Institute for Space Studies and adjunct professor at Columbia University, is a renowned climatologist yet also increasingly well known for his advocacy.

Four Models of Scientists and Politics

The literature on advocacy in science and policy contains four models: traditional, science communication, expert advocacy, and political advocacy. An overview of these models helps to evaluate Hansen’s actions as a scientist and advocate, providing a revealing case study of the implications and consequences of science advocacy.

The traditional model separates science from politics with the expectation that scientists should put forth objective data when pertinent without further involvement in the policy process (Lach et al, 2003).  This model suggests Hansen should remain strictly within his area of research, as he did for a significant portion of his career.

A second model, science communication, acknowledges the distinction between science and politics but implies that scientists should do more then simply hand off their data. They should be interpreting and explaining their findings to both policy makers and the public. After all, they are often on the leading edge of knowledge in their respective areas (Mills and Clark, 2001). Hansen, on the fore front of knowledge in climatology and modeling, made a well-known appeal to a Congressional committee in 1988 to take acknowledge the reality of global warming and take the threat of climate change seriously. This appeal included results of his research and future climate projections, falling under this model of science communication.

The expert advocacy model is based on the belief that scientists should be involved by communicating their research with an ethical obligation to act as advocates (Mills and Clark,  2001).  Advocacy in this form is defined as the process of informing policy makers, managers, and the general public about issues that arise in one’s area of expertise (Brussard and Tull, 2007). Dr. Hansen’s research has led him to believe that 350 parts per million (ppm) is the safe limit for atmospheric carbon dioxide, and therefore should be acknowledged in emissions reduction policies. The acceptable limit was previously thought by many scientists to be in the range of 450 ppm. Hansen, with help from others, has communicated this perceived quantity for target atmospheric CO2 to policy makers and the public. His findings have been recognized and well received by some, spawning new global initiatives for climate action. This model holds that scientists are qualified to be involved in decision-making processes, but it deems advocacy for specific policy preferences as inappropriate (Lackey, 2006).

Under the final model, which we call political advocacy, a scientist advocates a position beyond their core are of scientific expertise. In this case, according to Lackey, the arguments “ sound like science, read like science, are presented by people who cloak   themselves in the accouterments of science but who are actually offering nothing but policy advocacy masquerading as science” (Lackey, 2006, p. 15).

Hansen’s recent activities definitely reflect this concept of political advocacy.  His political advocacy is evident in his participation in coal-related protests in Washington and West Virginia; references to coal plants as  “death factories”; an appearance in a UK court to testify on behalf of climate activists; letters to Prime Minister Gordon Brown, the Obamas and the Government of Australia stating his position on climate change, necessary emissions reductions and policy recommendations. Hansen has controversially opposed the Waxman-Markey Bill and presented his own policy suggestions such as carbon taxation instead of cap and trade. Eileen Claussen, President of the Pew Center on Global Climate Change speaks on Hansen’s policy suggestions:  “I wish he would stick to what he really knows because I don’t think he has a realistic view of what is politically possible, or what the best policies would be to deal with this problem” (Kolbert, 2009, p. 44). Claussen is pointing the distinction between expert advocacy and political advocacy. Hansen’s expertise makes him well positioned to advocate a safe level of greenhouse gases in the atmosphere, but he is not an acknowledged authority on the relative merits of climate policy instruments or on the political process.

Underlying all of these models is the inherent risk of credibility loss, which significantly increases the farther scientists move away from the traditional model and from their area of expertise. Although Hansen has been recognized as a highly respected scientist for decades it appears that his venture into the political realm has tarnished his credibility as a research scientist. This change is exemplified by the controversy over Hansen as the 2009 recepient of American Meteorological Society’s highest honor, The Carl-Gustaf Rossby Research Medal.  Specifically, this controversy surrounded the public communication component of the award and the argument that Hansen conforms scientific data to his political opinions. In Hansen’s defense it could be argued that, conversely, his science has shaped his political views. Even if true, Hansen’s credibility as a scientist still suffers.

Credibility within the science community is critically important as its loss can compromise the utilization of research results (Aycrigg et al. 2006) and jeopardize the important contributions that science can offer to policy decisions (Pielke 2004). It is recognized that “science, politics and policy are inextricably connected” (Pielke, 2004, p. 406) and for this reason it is important for scientists like Hansen to move beyond the traditional model and communicate their science to policy makers and the public. Yet, the higher risks to credibility associated with political advocacy may be too great as they can compromise the contribution of potentially important research in policy-relevant issues.

One Response to Should Scientists be Advocates? The Case of Dr. James Hansen