Addressing the Regional Equity Implications of Climate Policy in Canada 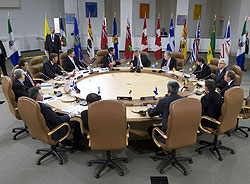 Canada has committed to reduce greenhouse gases by 20% below 2006 levels by 2020. The federal government has yet to release any credible plan for meeting those targets or an analysis of what the impacts of meeting those targets would be. In this policy and analytical vacuum, NGOs and think tanks have begun to put forward policy scenarios and cost estimates. The most prominent analysis was that released by the Pembina Institute and the David Suzuki Foundation (DSF) in October 2009, which prompted a strong backlash from politicians and the media.  Alberta Premier Ed Stelmach characterized the policy proposal as nothing more than a regional wealth transfer, saying “there won’t be another wealth transfer to Ottawa under my watch. There’s already one wealth transfer program and that’s equalization.” The National Post editorial board went further, arguing that “such an effort would shake the very pillars of Confederation.” The Canada West Foundation (CWF) joined the criticism, stating that the disproportionate burden to be borne by Alberta and Saskatchewan made the policy scenarios unfair and doomed to failure. Of the Pembina/DSF report, the CWF states that “[t]ough luck is the message we are hearing, and this is not only unfair but counterproductive in terms of implementing effective climate change policy in Canada” (p. 16).

(February 2 update:) The CWF expanded upon this point in a January 2010 report, in which they emphasized the negative economic effects for the rest of the country if the West were to bear a disproportionate burden of carbon emissions reductions: “the western Canadian economy is critically important to the rest of the national economy [emphasis theirs]… Hence, if the oil and gas sector that underpins so much of the western economy is hamstrung by policies aimed at curbing greenhouse gas emissions, the whole country will suffer” (p. 4).

Background on Regional Equity in the Canadian Federation

In a federation such as Canada, regional equity issues are inevitable, and much of Canadian political history has been about how to address them. The most obvious example is equalization payments made through the federal Equalization Program, which seeks to maintain a roughly equal level of government services across the country by transferring federal money to poorer provinces. Equalization payments are determined by taking the difference between a province’s revenue-raising capacity and the average revenue-raising capacity of all provinces. Another example would be Employment Insurance payments to citizens, for which eligibility is tied to a province’s unemployment rate. Both examples are the subject of much dispute by provinces.

Climate policy figures prominently in considerations of regional equity as well. Just as different provinces have different natural resource endowments, they also have different greenhouse gas emissions (which are often tied to their natural resources). The most affected provinces are those whose economies are disproportionately dependent on fossil fuels, namely Alberta and Saskatchewan.  As a result, these provinces would be expected to achieve greater greenhouse gas emission reductions than the rest of the country. Because the policy instruments under consideration – a carbon tax or a cap and trade system* – would create new revenue flows to the federal government, some Westerners are concerned that a regional wealth transfer between the West and the East will result. (February 2 update:) Others, such as the CWF, are concerned that the opposite will occur – that the negative economic impacts of GHG reduction policies in the West (namely in the oil sands) will infect the rest of the country, bringing with it a painful economic malaise.

Serious climate policies do not necessarily result in a regional transfer of wealth, however. It depends on how they are designed. In particular, regional distributional consequences of climate action would be strongly influenced by how the carbon-based government revenues were allocated by governments.

For example, even the controversial Pembina Institute and DSF analysis proposed that a portion of the revenue from carbon pricing go toward payments to individuals to compensate for regional variations in household energy cost increases (Albertans would receive the highest payments – p. 9) and payments to certain manufacturing sectors (such as mineral mining and metal smelting)  to ensure that output levels would not drop below 2008 levels. But most of the new revenues in their policy scenarios were used to reduce personal income tax rates. That policy has many advantages, but it would have a less direct impact on the regional distribution of economic activity. If regional balancing was considered more important than income tax reduction, the mix of fiscal policies for allocating the carbon revenues could be changed to emphasize those that put a greater emphasis on differential costs of compliance or some other relevant factor.

A valuable December 2009 report by Snoddon and Wigle for the Institute for Research on Public Policy went further. They model a policy scenario where all carbon tax revenues are allocated back to provinces in proportion to their initial emissions, and then allows the provinces to decide how to allocate the revenue. In their model, because of revenue recycling, Alberta and Saskatchewan are actually better off after the climate policy is put in place (p. 11).

The regional impacts of climate policies are not inevitable and they are certainly not something generated by a modelling exercise commissioned by environmental groups. They are policy design choices made by governments.

Addressing the climate crisis will result in increased costs to consumers and producers; as we move to internalize the cost of greenhouse gas emissions, this outcome is inevitable. These costs will only increase the longer it takes for policy to be implemented. As the Pembina/DSF analysis made clear, economic growth is still possible, even in the hardest hit provinces under their policy scenario. Under their assumptions, growth will be reduced from business-as-usual levels, but it is still robust economic growth. It is true that there will be a change in the regional redistribution of costs and benefits of carbon-intensive economic activities. But this does not need to lead to the type of tax revenue grab that many Westerners fear. To the extent that we wish to limit regional impacts we have a range of fiscal policy tools to do so, such as decentralized revenue recycling and even broader policies like the Equalization Program.

Given the urgency of the climate change problem, it is necessary for Canada to have a reasoned debate about how to address the regional impacts of climate policy. We may decide that some degree of regional redistribution is a good idea because the economy will need to adjust to pricing carbon. But if we choose to minimize the regional implications of the policy, there are policy tools available to do that.  There is no doubt that such a debate will be a significant challenge to the federation, but it is hardly an insurmountable obstacle to climate policy.  What is most critical is that this debate begin immediately so that we can make progress on developing and implementing a climate policy in a timely fashion. Perhaps, like Nixon in China, our Conservative Albertan Prime Minister is ideally placed to begin this debate. If he continues to refuse to exercise constructive leadership on this issue, civil society will need step forward to facilitate this dialogue.

* A cap and trade system would not necessarily generate government revenues. Government revenues would be available if allowances were auctioned off, as many economists would prefer. However, it is also possible to distribute allowances for free, as the bill passed in the US House would do. Free granting of allowances based on current or historical emissions is another policy tool available to address the distributional consequences of climate policy.