Update on BC electricity trade balance

2009, providing additional evidence that BC has moved into a situation of being a net importer of electricity.

In the continuing controversy over BC electricity policy, the question of whether the province is a net importer or exporter continues to play a surprisingly large role. In a recent comment on BC’s self-sufficiency policy, NDP energy critic John Horgan claimed that the government has created an artificial panic over the need for new power. He states: “Over the last eight years, B.C. has been a net exporter of electricity.” In response, Energy Minister Blair Lekstrom states “Many British Columbians are surprised to learn that BC Hydro is a net importer of electricity to keep our lights on. Despite what Horgan would have you believe, BC Hydro has imported more electricity than it has exported in eight of the last 10 years.” Given that data on trade flows, while complicated, are readily available, this persistent factual disagreement is perplexing.

We attempted to sort through some the methodological and conceptual issues involved in a post last year. The biggest difference underlying the apparently conflicting claims is whether one is examining just BC Hydro or the entire province – there are electricity producers in the province other than BC Hydro. But even that can’t account for Horgan’s mistaken interpretation of the situation.

In 2009, the province consumed 5.8% more electricity than it produced. This means that BC was a net importer of electricity for four out of the past six years. There are many important and challenging issues in BC electricity policy. We should save our intellectual and political energy for a reasoned discussion of them, and move beyond the false debate about whether BC is a net importer or exporter.

A table and chart are included below with a summary of the data. The trade data is reported at BC Stats. The data on BC generation and consumption were provided directly to me by BC Stats. 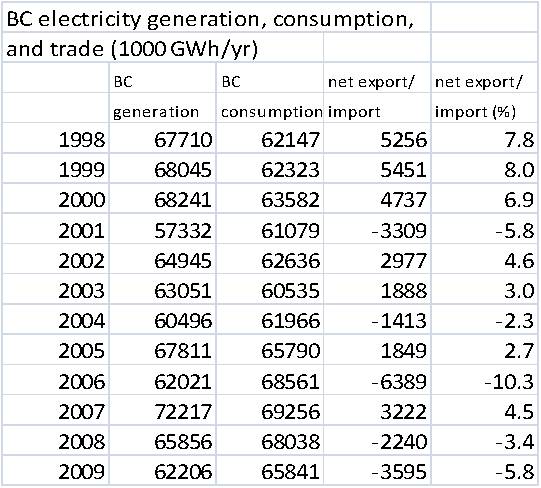 4 Responses to Update on BC electricity trade balance