Electricity Trade in British Columbia: Are We a Net Importer or Exporter?

Electricity policy in British Columbia has become increasingly controversial over the past several years. The conflict has focused on new hydroelectricity projects being developed by private sector “independent power producers” (IPPs). Environmentalists and unions have been highly critical of the Campbell government’s decision to rely on IPPs for new sources of electricity. The critics have raised concerns about losing public control over water resources as well as the cost-effectiveness and environmental consequences of multiple, small, privately operated hydro facilities. IPP advocates emphasize the environmental advantages of hydropower compared to other, especially fossil fuel sources of energy, and the complex review and approval process required.

Part of the conflict over IPPs stems from differences about how much new electrical power we need in BC. IPP advocates point to economic and population growth, and BC Hydro forecasts electricity demand will increase by 32% over the next 20 years (from 59,000 GWh/yr to 78,000 GWh/yr).  They also note that BC Hydro has become a net importer of electricity over the past decade. IPP critics question the need for so much new power. They emphasize the potential for conservation, but also claim that BC has been a net exporter of electricity.

Whether the province is a net importer or exporter of electricity has thus become an important part of the dispute. For example, Western Canada Wilderness Committee’s Gwen Barlee claims. “According to B.C. Stats, the province has been a net exporter of electricity for seven out of the last 11 years.” Steve Davis, President of the Independent Power Producers Association of BC, claims “Prior to fiscal 2008, BC Hydro was a net importer of electricity for seven consecutive years.” At first glance, it is hard to imagine that both claims can be true, and it seems counterproductive to have a dispute about what would seem to be a question easily resolved by examining official statistics.

We’ve tried to address this factual issue by digging into the sources and numbers. The situation is indeed complex, but not so complex that it needs to be mystifying or an unresolvable conflict. We believe a somewhat more nuanced approach produces a clear picture of the situation. We’ve provided a detailed analysis below in the hopes that it will help resolve some of the factual conflicts and make way for a more productive dialogue on the real issues at dispute in the controversy over private power in BC.

There are several confounding factors which contribute to this difficulty, including having several different power producing entities in British Columbia, an international agreement that includes power transmission, the fact that BC imports and exports power for profit, and multiple sources of data. Despite these confounding factors, Statistics Canada has collected data on BC’s electricity generation and trade for over three decades, and some clear patterns emerge from this data.

Context Fact #1:  BC Hydro electricity trade is not the same thing as BC electricity trade. BC Hydro is not the only source of generation in the province – Fortis BC operates in the Kootenays, and large industrial generators also provide power to the grid, most notably Alcan in Kitimat, and Teck Cominco in Trail. Last year, the industrial producers contributed 20% of total BC electricity generation – the figure has fluctuated only slightly between 19 and 22% over the past 5 years. Despite how it dominates our thinking about electricity in BC, BC Hydro only generates less than 80% of the province’s electricity (we were unable to find figures separating out BC Hydro from other BC utilities). This critical fact allows the apparently competing statements by Barlee and Davis above to both be correct. Barlee is correct because BC Stats uses Statistics Canada and National Energy Board figures which include all sources of generation (see below). Steve Davis is correct because he’s only referring to BC Hydro (that data is shown at the bottom of this post).

Context Fact #2:  Through the Columbia River Treaty, BC is entitled to power generated in the US — this is the so-called “Canadian entitlement to downstream benefits.” BC agreed to build dams on the Canadian portion of the Columbia to help the US with flood control, and our dams also increase the amount of power the US can get from their dams. In exchange, we received an entitlement of about 1200 MW of power, compared to BC Hydro’s total capacity of about 11,280 MW. While the US officially delivers this power to BC, we don’t take it as power to be used in the province. Instead, Powerex, the BC Hydro subsidiary that handles cross-border trades, sells it in the US market, and BC gets revenue without ever importing the power (The most recent budget (p. 142) reports this amount as $255 million for fiscal year 08/09). IPP critics argue that the so-called CE – the Canadian entitlement – should be considered part of domestic power resource. If we did, the net trade balance would look more favourable.

Context Fact #3:  BC Hydro does a lot of electricity trading to take advantage of the market to raise revenues, not to address changing power needs to BC customers. As a result, the trades flows in the Statistics Canada data are higher than they “need to be” to serve BC power customers. Unfortunately, it is hard to separate out these flows designed to take advantage of fluctuating prices from those designed to address actual power needs. However, these revenue-oriented exports and imports are likely to balance each other out, so while they may inflate the magnitude of total trade flows, they shouldn’t affect the net flows significantly.

Context Fact #4. There are multiple sources of data. BC Hydro has its own data, but it does not address imports and exports outside the BC Hydro system. The National Energy Board reports monthly statistics for BC, but they only measure flows across the Canada-US border, not interprovincial flows. Statistics Canada data reports trading from all BC entities, and includes international trade from the NEB as well as interprovincial trading. The basis for the Statistics Canada data is provided here. These are complex issues, and if you disagree with our interpretation, please comment below or email.

What the data say

1.       Historically, BC has been a net exporter of electricity.  As Figure 1 below shows, in the past 32 years, there have only been five years in which BC has imported more power than it has exported. One thing apparent from the long-term data is a significant amount of fluctuation in imports and exports. These fluctuations result from changing environmental conditions that affect supply and demand, such as the amount of precipitation filling BC reservoirs and weather impacts on demand for heating and cooling.

2.       BC’s trade surplus in electricity is declining, and over the past five years a small trade deficit has emerged.  BC was in a deficit 4 of the last 10 years. Three of the past 5 years have been deficit years. Over the past 5 years (2004-08), BC imports exceeded exports by 4,807 GWh, 1.5% of the 327,271 GWh generated in BC over that 5 year period. Figure 2 shows the electricity trade balance of the last 10 years. Figure 3 puts these trade flows in perspective of total BC generation. 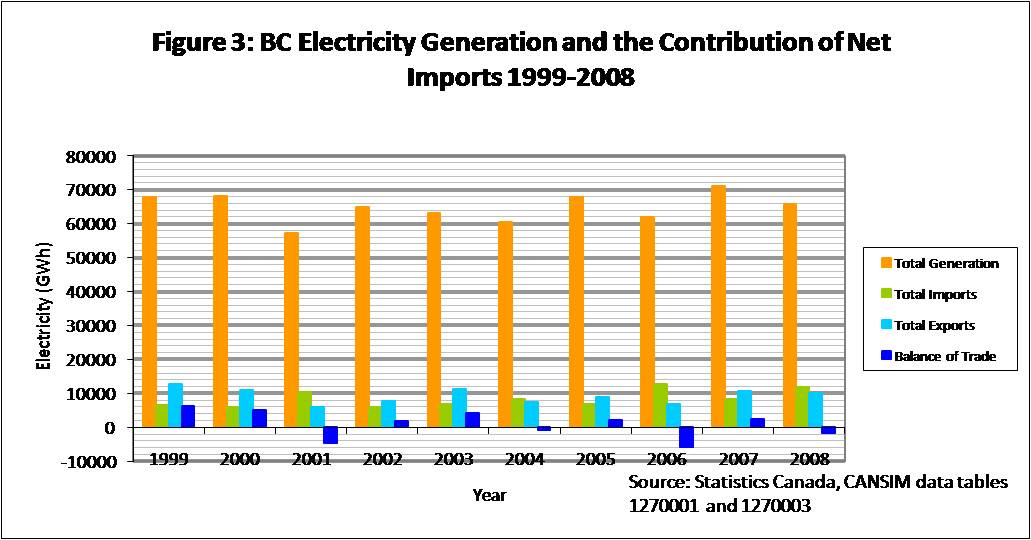 3.       The Canadian Entitlement to the downstream benefits of the Columbia River Treaty is not included in current trade statistics. If it were included as a BC generation resource, BC would have access to 1,200 MW of capacity. Table 1 compares that figure to other BC projects. Essentially, it is somewhat larger than one very large new dam project.

The CE would provide an additional 4,300 GWh/year of electrical energy to BC. If we had been using that energy, it would have eliminated the trade deficit for all put one of the past 5 years. Pooling the past 5 years together, if we’d used the CE it would have turned a 5 year deficit of 1.5% into a 5 year surplus of 5.1%. That compares to BC Hydro’s forecasted increase in demand of 32% over 20 years, or a 16% increase in electricity generation if the province meets the BC government requirements that half that increase in demand be met with conservation. BC Hydro’s current planning assumes even higher potential for conservation – they believe 72% of future demand growth can be offset through conservation, meaning that demand could be met with only a 9% increase in new sources of electricity. Including the downstream benefits of the Columbia River Treaty doesn’t eliminate the forecasted gap in BC electricity supply, but it does narrow it.

Whether or not BC should take the Canadian entitlement as power is a complex policy question that should consider, among other things, that at present that power is currently displacing fossil and nuclear sources of generation in the US. Our purpose here is merely to put the magnitude of the CE in perspective.

Some other notable patterns in the data

The following two figures show the sources of BC import and the destination of BC exports. They reveal that trade across the 49th parallel is far more important than trade across the Rocky Mountains. We also include a table of BC Hydro trading statistics for the record. 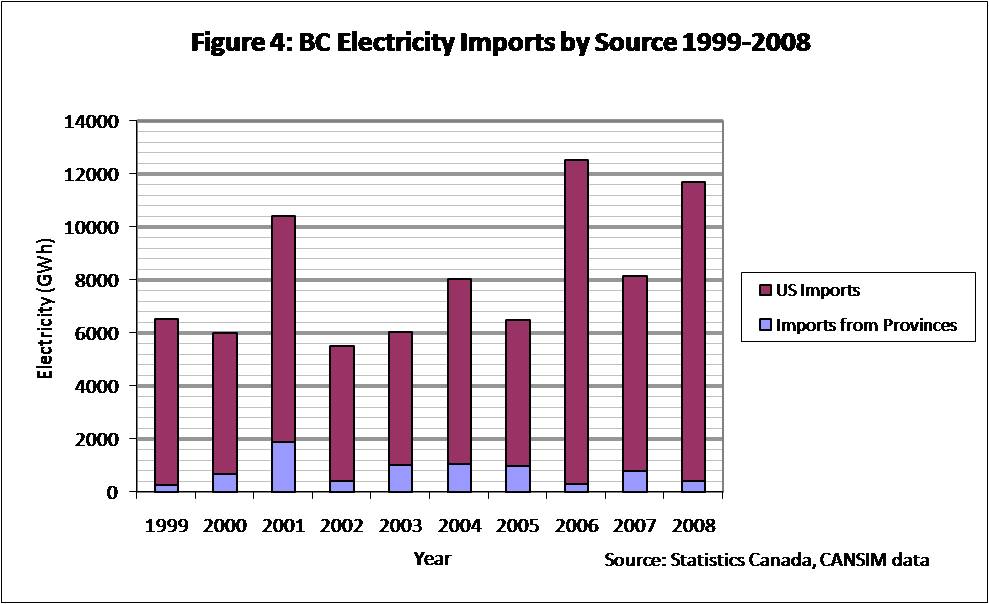 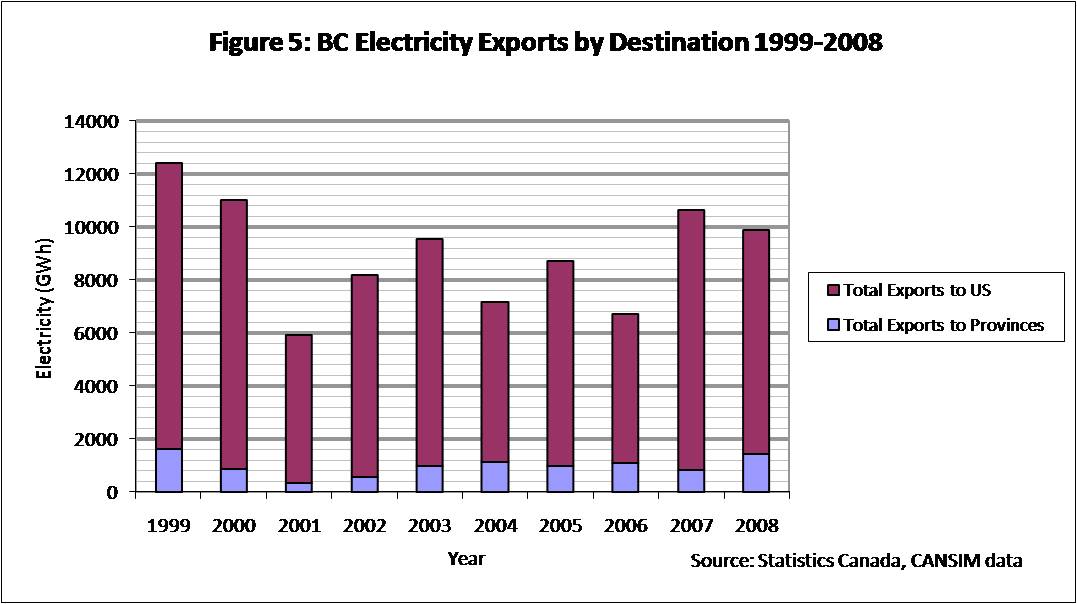 This entry was posted in British Columbia Electricity. Bookmark the permalink.