UBC Student Simulation: Should there be a Moratorium on New Approvals of Oil Sands Projects in Alberta? 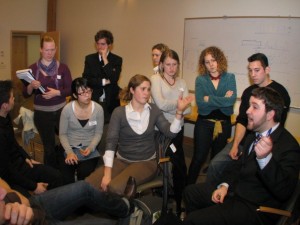 During dinner break, Pembina staff trying to get a word in edge-wise while pipeline rep makes his case

As part of a course on Sustainable Energy Policy and Governance, students participate in a simulated multistakeholder consultation about topical policy issues. Half of this year’s students simulated a debate about whether there should be a moratorium on new approvals of oil sands projects in Alberta. The scenario was presented as follows:  After considerable domestic and international conflict, the Premier of Alberta has announced a new multistakeholder consultation process to address the question of whether the province should impose a moratorium on new approvals for oil sands projects.

The learning objectives of this exercise are to develop practical skills — teamwork, research, and communication — necessary for constructive participation in policy development, while simultaneously developing a deep understanding of one crucial component of energy policy. While I feel confident that these simulations perform this educational purpose, I often wonder whether they might provide insights into real-world policy dynamics.  I’m reporting on the process and results here in the event that others inside or outside the ivory tower might benefit from our experience.

NOTE:  None of the statements in this blog refer to any actual positions or statements of real people or real groups, unless explicitly referenced. The views below are only those of UBC students pretending to be actors in the oil sands controversy.

Participating students were randomly divided into nine groups reflecting different stakeholders involved in the process: Alberta Energy, Alberta Sustainable Resource Development, Environment Canada, Canadian Association of Petroleum Producers, Canadian Energy Pipeline Association, Pembina Institute, Canadian Parks and Wilderness Society, Athabasca Tribal Council, and the Regional Municipality of Wood Buffalo. The groups submit 2000 word briefs designed to articulate the position of the group. We then meet for a 4 hour session to try to develop a consensus. I act as facilitator of the process.

The session began with each group giving a 5 minute presentation outlining their initial position. With perhaps one exception, the groups seemed to accurately reflect the position of their real-world models. Industry groups were adamantly opposed as was Alberta Energy. Pembina clearly articulated the position laid out it Taking the Wheel supporting a moratorium until a more effective regime of environmental regulation was put in place. CPAWS took a similar position, focusing more directly on wildlife concerns. The Athabasca Tribal Council delegate eloquently spoke to the health concerns of downstream residents and the need to respect treaty rights. Environment Canada took a softer position, not commenting directly on the merits of the moratorium, but instead emphasizing the importance of pushing through Bill C-16, the Environmental Enforcement Act, recently introduced in the House of Commons, and improving the framework for monitoring through CEMA. The Regional Municipality of Wood Buffalo focused on the need to strengthen social and community impact assessment in the environmental assessment process. The most surprising position was that of the group representing Alberta SRD. In a break with official Government of Alberta positions, the student group advocated adopting the position of the SEWG component of CEMA that there be a partial moratorium until an effective land use plan was put in place to protect conservation values in the region. Not surprisingly, colleagues at Alberta Energy found this disconcerting.

After the initial presentations, groups were asked to comment on each other’s arguments. A lively exchange ensued, much of which was focused on the economic consequences for Alberta if a moratorium were to be enacted. Industry groups threatened divestment. Environmental groups emphasized that they were only talking about new approvals and not affecting facilities in operation or already approved. Industry groups noted that the recession has produced a de facto moratorium in any event, so there was no need to adopt one through policy. Environmental groups countered that that made it a good time to adopt a moratorium, since the costs to the economy would be lower, and the pause allows time to create a more effective environmental framework. The Pembina delegate was very eloquent in expressing the frustration of many environmentalists about participating in stakeholder meetings like this for over a decade, and having their recommendations ignored by government. He very strategically noted that industry representatives had agreed to the CEMA recommendation for a moratorium last year.

The group dynamics became a bit more promising when the industry groups suggested that they were not necessarily opposed to a moratorium if there was a “business case” to support it (well said), and that they could not live with an indefinite moratorium. When environmentalists agreed to a specific time limit (end of 2011), and the Alberta SRD articulated a thoughtful justification for a moratorium, there was increased optimism in the room about the potential for agreement.

When the specifics of a moratorium proposal were outlined, we ran into stumbling blocks about the conditions necessary to lift a moratorium. Industry groups were concerned that the need to meet some standard for having an effective environmental regulatory regime in place was no different from an indefinite moratorium. Environmental groups feared that removing those conditions would eliminate the pressure necessary to force the Government of Alberta to take more rigorous action. With time running out, environmentalists agree to drop the need to meet specific conditions, so that the moratorium would be lifted at the end of 2011 regardless, and if a more effective regulatory regime had not been put in place by then, everyone would simply have to come back to the table, or otherwise do what they needed to do.

Meanwhile, Alberta Energy was given the floor, and outlined their proposal, instead of a moratorium, to grant large quantities of federal (!) money to the assembled stakeholders to address their biggest concerns. Industry and community groups were enthusiastic, and the Athabasca Tribal Council representative agreed, so long as they were made full partners in the leasing process. Environmentalists, however, were upset with what they felt was an effort to buy off opposition and avoid the issue of a moratorium.

We returned to the moratorium proposal that had previously gotten agreement from environmentalists and industry. At the very last minute, the facilitator canvassed the room for support of the proposal. Despite the facilitator’s best efforts to highlight industry’s support for the proposal, the Alberta Energy delegate could not be swayed. In the end, all stakeholders were in agreement with the proposal for a moratorium until 2011 except Alberta Energy, whose delegate remained steadfast that the evolving policy framework was appropriate, and that a moratorium was not in the interest of Albertans.

The meeting adjourned without agreement.

From my perspective as an external observer of oil sands politics, with the exception of Alberta SRD’s position, the dynamics and outcome were highly reflective of real world politics. Not bad for a group of UBC political science and conservation students.

Next up:  UBC Students address the Electricity Supply Gap in British Columbia

This entry was posted in Oil Sands. Bookmark the permalink.