Insights from new book: Why are so many potentially beneficial policy changes not adopted? The case of forest policy in Canada 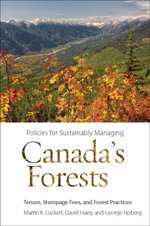 Policy analysts and advocates frequently are left scratching their heads when policy changes that seem self-evidently superior to the status quo are not adopted. Forest policies in Canada are a fascinating example. Implemented mostly in the mid-20th century, most forest policy analysts believe that the current system is now anachronistic and unable to meet the aspirations for sustainable forest management in the 21st century. This month, a new book on Canadian forest policy was released by UBC Press that explicitly makes this case: Policies for Sustainably Managing Canada’s Forests: Tenure, Stumpage Fees, and Forest Practices. The book was authored by two forest economists, Marty Luckert (University of Alberta) and David Haley (professor Emeritus from UBC), and a political scientist, me. We provide detailed comparisons of policies for tenure, stumpage, and forest practices across the Canadian provinces. It nests these comparisons within an analytical perspective of property rights theory and a concern for advancing sustainable forest management.

One set of insights emerging from the analysis is the barriers to innovative policy change. The book develops five categories of barriers to change:

These five barriers to change have proven quite formidable in the case of Canadian forest policy, but are also an effective way to think about the challenges to adopting new policies in other fields as well.

The book is now available for purchase, and UBC Press has made the introductory chapter available on-line.

The cover photo is of Pemberton Valley, 170 km north of Vancouver, from the amazing Mark Richards in Whistler.