What’s Really Behind the Decline in Belief in Climate Science: It’s the Economy

What’s Really Behind the Decline in Belief in Climate Science: It’s the Economy
Lisa Danielson and George Hoberg
September 21, 2011

There is widespread evidence that the American public’s belief in climate change is declining. The existence, immediacy and seriousness of climate change have all been called into question, with a Gallup poll in 2010 showing that only 50% of Americans surveyed believe that humans are affecting climate change, opposed to 61% in 2007.

This decline plays a crucial role in how governments react to climate change, as elected politicians care about what people think. If public opinion is showing a trend towards a disbelief in climate science, this could be an important factor in discouraging political action. A recent paper, “Fair Weather Friends,” by Lyle Scruggs and Salil Benegal from the University of Connecticut’s Department of Political Science, tries to tease out an explanation for these trends.

The authors identify three competing explanations for this decline: media and conservative counter-mobilization, weather anomalies, and the economic recession. While all these factors have an affect on how the public perceives climate change, their analysis concludes that the state of the economy is the cause that has the most weight in shifting public opinion.

Scruggs and Benegal provide a detailed examination of how media bias influences climate coverage, and the concerted campaign by conservatives to discredit climate science. They review arguments that the media’s tendency to report opposing views on an issue has the consequence of misrepresenting the pervasive consensus on climate science. But they note that loudly voiced views that attack climate science started in the early to mid 1990’s, while the public seemed to increasingly embrace climate science until 2007-2008.

They also focus on “climategate,” the notorious instance of hacked emails appearing to discredit climate science. There is a widespread belief that this faux scandal had damaging impacts on the public’s belief in climate science. But the paper examines the sequence of events and points out the revealing fact that the drop in belief in opinion polls ­preceded the November 2009 climategate incident. A widely report Pew poll shows a significant drop in an October 2009 survey.

Several studies show that people tend to believe more in global warming if they think recent temperatures are higher than normal. Scruggs and Benegal analyze the data and show that it provides some support for trends in climate beliefs. However, local weather anomalies are linked with the likelihood that individuals express “pro-climate” opinions, and do not provide an adequate explanation for the size of the shift in public opinion.

There is considerable evidence that public support for the environment is inversely related to the health of the economy. This does not mean that environmental concerns are completely disregarded during recessions, but simply that there is a shift in priorities. According to the paper, the “Great Recession” is the biggest contributing factor to the shift in public opinion, and they use new survey evidence to map decline in concern with climate change to the economic recession. A summary graph of the results is provided below. 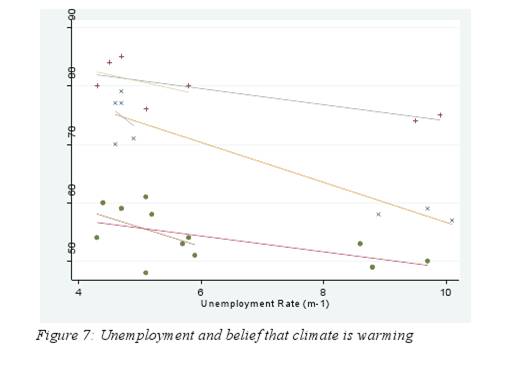 The three lines chart the response to the question “are we warming now” in three different surveys (Gallup, Pew and OSU/Stanford). Higher on the vertical axis represents a higher chance of answering “yes” while lower is the greater chance on answering “no.”

Scruggs and Benegal show that there is clear correlation between the economic indicators such the unemployment rate, and the priority given to climate change mitigation. This shows the profound impact of an economic crisis has on public support for a long-term problem such as climate change.

The authors conclude: “We evaluate over thirty years of public opinion data about global warming and the environment, and suggest that the decline in belief about climate change is most likely driven by the economic insecurity caused by the Great Recession.” For climate hawks, the good news is that belief in global warming and support for action may rebound when economic conditions improve. The bad news is that it is unlikely to happen before then, and more generally that support for climate action and other environmental initiatives is so vulnerable to fluctuations in economic conditions.

Pew Center for the People and the Press. . “A Deeper Partisan Divide Over Global Warming.”  May 8, 2008

Pew Center for the People and the Press. Little Change in Opinions about Global Warming -Increasing Partisan Divide on Energy Policies. October 27, 2010.

This entry was posted in Climate Action Policy, Uncategorized. Bookmark the permalink.