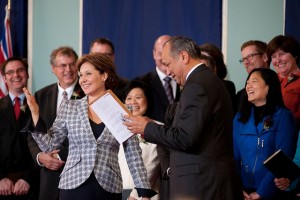 Christy Clark was sworn in as British Columbia’s 35th premier yesterday. In announcing her new cabinet, Premier Clark reversed significant parts of the tumultuous reorganization introduced by Gordon Campbell in October 2010. The centerpiece of Campbell’s reorganization was the creation of a new Ministry of Natural Resource Operations to consolidate operational functions of several natural resource organizations in an effort to create “one land manager.” The change caused considerable uncertainty and confusion.

But Premier Clark’s change also seems to at least partly reverse one of the beneficial effects of the prior reorganization: bringing the operational approval decisions for multiple resources into the same organization. Responsibility for energy and major mining operational decisions has been moved back into the Ministry of Energy and Mines. This reversal would seem to undermine the promise of the October reorganization of improving the capacity of the government to address the cumulative impact of multiple resources, as well as deliver on the “one land manager” vision.

Given the uncertainty created by the October reorganization, the staff of natural resource agencies and their clients would certainly benefit from a period of stability. Premier Clark’s personnel announcements send mixed signals. On the one hand, the leadership of the new organization might indicate that the new MFLNRO is here to stay for a while. Steve Thomson, who Campbell had made minister of the new Ministry of Natural Resource Operations, has been appointed Minister of the enlarged agency. Doug Konkin, the architect of the October reorganization, has been appointed Deputy Minister.

On the other hand, Premier Clark also signaled that the entire structure is under review. While details have yet to be released, Randy Hawes has been appointed Parliamentary Secretary for Natural Resource Operations Review. If the new organization were settled, there wouldn’t seem to be a need for a high profile review position.

The October reorganization was in part justified by an acknowledgement that the relative role of forestry on the land base has been in decline over the past decade. While it is perhaps only a symbolic change, the fact that Forestry gets pride of place in the enlarged organization’s name may be significant. The new name hardly roles off the tongue and is remarkably long (exceeded in this cabinet only by Labour, Citizens’ Services and Open Government), so there must have been a strong reason to maintain Forests in the title.

Perhaps of greater significance, the BC Forest Service has been reunited. The October reorganization had torn apart an organization, founded in 1912, with a strong culture and great deal of pride. The new organization brings it back together.

For now at least.

One Response to Premier Christy Clark: More Reorganization of BC Natural Resource Ministries